Would Obama prosecute the Bush administration for torture? 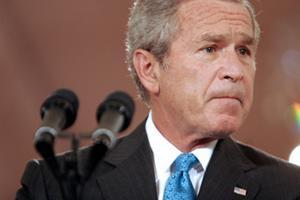 President Bush speaks at the White House on Sept. 6, 2006, about the transfer of 14 terror suspects from secret CIA custody to the prison at Guantánamo Bay, Cuba.

Obama's brain trust wants to form a commission on torture and call Bush officials as witnesses, but put off prosecutions -- if any -- till a second term.

Aug. 4, 2008 | WASHINGTON -- On the campaign trail in April, Barack Obama was asked whether, if elected, he would prosecute Bush administration officials for establishing torture as American policy. The candidate demurred. "If crimes have been committed, they should be investigated," he said. But he quickly added, "I would not want my first term consumed by what was perceived on the part of the Republicans as a partisan witch hunt, because I think we've got too many problems to solve."

People who have given advice to the Obama campaign say they see little political advantage in the candidate discussing during a general election campaign how his administration might investigate or prosecute Bush administration officials for torture. Other than the response above, prompted by a question from Will Bunch of the Philadelphia Daily News, he has said little about his plans. But behind the scenes, a slate of foreign policy and human rights experts with various degrees of connections to the Obama campaign, some of them likely to occupy positions of authority in an Obama administration, have begun to discuss that very issue, and in great detail. What they're likely to recommend to Obama, should he become president, won't fulfill the dreams of those who've hoped for immediate criminal accountability for Bush administration officials.

Members and advisors of the administration-in-waiting have formed largely informal working groups to take up a whole host of issues related to the Bush administration's legacy, like what to do about the Guantánamo detainees. While they have not been asked to develop a formal recommendation for Obama on the question of criminal accountability for torture, those who are weighing the issue, a group that includes some of the 300 people the New York Times recently described as Obama's "mini State Department," are moving toward consensus on some key points. Specifically, don't hold your breath waiting for Dick Cheney to be frog-marched into federal court. Prosecution of any officials, if it were to occur, would probably not occur during Obama's first term. Instead, we may well see a congressionally empowered commission that would seek testimony from witnesses in search of the truth about what occurred. Though some witnesses might be offered immunity in exchange for testimony, the question of whether anybody would be prosecuted would be deferred to a later date -- meaning Obama's second term, if such is forthcoming. .

While there are certainly participants in these discussions who believe that top-level administration officials deserve to be hauled before a judge, even the harshest critics of the current administration's torture policies don't think there will be an immediate effort by the next president to prosecute anyone from the Bush administration. "I don't sense the political appetite for it," said Tom Malinowski, Washington advocacy director at Human Rights Watch, who is involved in the informal discussions about what Obama could do about investigating torture. "I don't think the next president will do that no matter who he is."

Attorneys say successful prosecutions would be tough anyway. The Justice Department approved the abuse and Congress changed the War Crimes Act in 2006 to make prosecutions more difficult. There is also speculation that any end-of-term presidential pardons by Bush might include some of the likely torture defendants.

But the avenues of investigation being discussed don't necessarily rule out at least an attempt at prosecuting Bush officials at some later date. The nonpartisan presidential commission that Malinowski and other people involved in the discussions are advocating would have considerable power, granted by Congress, to force cooperation. The commission would ultimately deliver recommendations to the president that would include, among other things, whether or not Cheney deserves that walk up the courthouse steps.

The first order of business, however, would be learning the truth. "I think a lot of us feel that the American people are entitled to the whole truth," said another person who knows about the discussions. "The American people are entitled to [an investigation] from an official body that has access to the classified documents that makes as much public as it can," that person added.

It would also try to confirm or debunk, once and for all, the claims of high-level Bush administration officials that the use of abusive interrogations worked and resulted in significant intelligence gains.

This might include claims made by the president. In a Sept. 6, 2006, White House address, Bush admitted to a network of secret CIA prisons and the use of "tough" interrogation techniques by the agency. He then ticked off a treasure trove of intelligence he said the CIA pried out of Abu Zubaydah, a suspected al-Qaida operative captured on March 28, 2002, by intelligence agents from the United States and Pakistan.

But FBI agents initially interrogated Zubaydah using tried and true, noncoercive techniques, reportedly with success. The CIA later took over and used coercive methods that included waterboarding. Controversy lingers over claims about the effectiveness of the CIA's methods, particularly in comparison to the FBI's approach.

Like the 9-11 Commission, Congress could grant this panel the authority to issue subpoenas to compel witnesses to cooperate and leverage the production of documents. The panel might also have the power to grant witnesses immunity from prosecution in exchange for cooperation.

Immunity, in fact, remains one of the thorniest issues in the ongoing discussions about how to investigate the Bush administration's interrogation program. A recent Newsweek piece by Stuart Taylor Jr. suggested that Bush "pardon any official from cabinet secretary on down who might plausibly face prosecution" for torture during the Bush years. Taylor argued that this would encourage those individuals to testify freely in front of some sort of truth commission.

That indemnity arrangement is more reminiscent of South Africa's Truth and Reconciliation Commission, the 1990s-era investigation aimed at unearthing the sins of apartheid. But blanket indemnity would not be part of the commission under discussion. "A lot of people think that that is not something that goes over well with the American people," said the person familiar with the discussions. "What we have much more of a tradition of is presidential fact-finding commissions."

Instead of offering a blanket amnesty, the fact-finding commission would delay any decisions on whether or not to attempt to prosecute any Bush administration officials for their transgressions. Given the time it would take for a commission to do its work, any such decision would probably not take place till Obama's second term. That would be in accord with what Obama said in April, in what seems to be his lone statement on the issue of accountability, about not wanting his first term to be taken up by what critics would try to characterize as political retribution.

"Something like this would be unprecedented in the American experience and I think it would be absolutely necessary," Kenneth Kitts, author of "Presidential Commissions and National Security: The Politics of Damage Control," said when informed of the rough plans for the commission. "We've had panels that have looked at scandals. We've had panels that have looked at intractable political problems," said Kitts, a political science professor at South Carolina's Francis Marion University. "But nothing in terms of looking at an issue that has this array of legal, moral and even spiritual questions attached to it."

Ben Rhodes, a foreign policy advisor to the Obama campaign, did not respond to Salon's request for comment by press time.