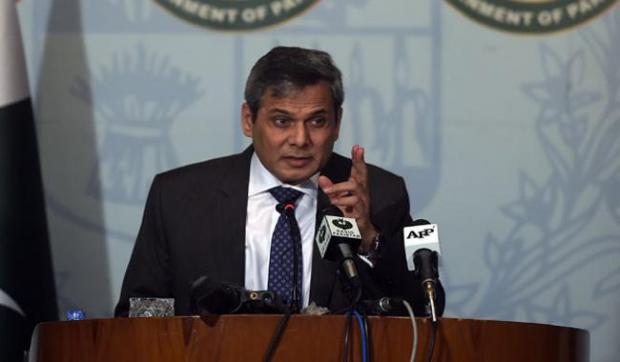 ISLAMABAD: Foreign office spokesman has said that India has been involved in terrorist activities in Pakistan.

He said, “We have taken issue to the UN Secretary General about involvement of India in terrorist activities in Pakistan.” He said Pakistan is biggest victim of terrorism.

Speaking at the weekly news briefing here Thursday, Foreign Office spokesperson Nafees Zakaria said investigation is underway in Lahore bombing and some arrests have been made.

He said planning for the Lahore attack was made in Afghanistan.
Replying to another question, the Spokesman said continuing instability in Afghanistan has created space for the non-state actors and terrorist organizations to find their foothold in that country.

Zakaria said Jamatul Ahrar which is based in Afghanistan claims carrying out terrorist s incidents in Pakistan. He said we have raised the issue of terrorist activities on Pakistan soil from across the border. He said we have also urged the Afghan leadership to take necessary steps to address our concern.

About Pakistan China cooperation in the context of CPEC and threats emanating from India side, he said it is a regional economic development project and will benefits the entire region.

He pointed out that India is openly opposing the China Pakistan Economic Corridor.
“We are aware of Indian government’s plans to sabotage CPEC,” he said. India’s interference in Pakistan is not concealed.
He added India’s nuclear weapons are a threat to peace in South Asia. Moreover, he maintained massive purchase of weapons by India could lead to instability in the region.

Even Kulbhushan Yadav had admitted of making an attempt to affect the work on CPEC, Zakaria said. Yadav is an Indian who was arrested in Balochistan last year.

He condemned Indian firing on the Line of Control, saying three Pakistani soldiers were martyred. He paid tribute to the law enforcement agencies for fighting terrorism.

“Violation of human rights continues in Indian occupied Kashmir,” he added saying the international community should take notice of Indian aggression there. (INP)

More nad more we gather evidence tat the so-called “war on terror” has become a war on Islam. In Asia India has become the major source of money and weapons for so-called “freedom-fighters” or whatever the call themselves. Actually it doesn’t seem to matter what is on their agenda, as long as it goes against Pakistan or as long as their actions destabilize Pakistan, India will provide money, arms whatever they need.

It is understood that India alone would be too much of a coward to take on Pakistan. All this they do with the explicit consent of the USA.