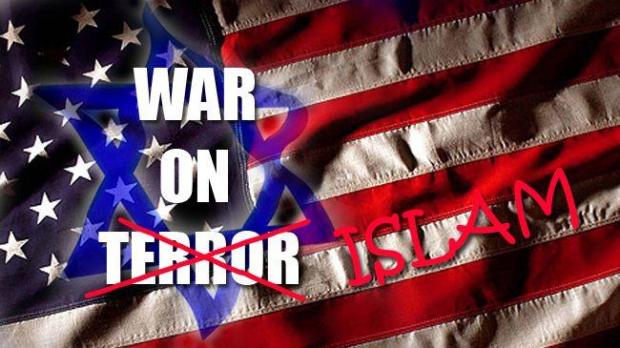 While I do not say that this is a war against Islam per se, I certainly do think this is a war against the political form of Islam (which is required according to the Quran) since the political form of Islam with it's different ideology as compared to Western "liberal democracy" might be viewed as un-cooperative and as such as danger to Western leaders’ (and indeed any leaders’) interests, thus they strive to get rid of this danger, exactly how Communism was seen as a danger to the West during the Cold War. Some people might see this website as "sensationalist", while I see what they mean because the title of this site is quite inflammatory, there is merit to my naming of this website as it is. Right now in the world there are many Muslim countries wherein the minorities are persecuted, I acknowledge that, there should be more efforts to solve these problems too.

I believe this is a war on Islam, or rather the political aspect of Islam judging by the repeated attempts to put down attempts to implement the Shariah as seen in places like Central Asia where Western nations speak about the supposed threat posed by these systems of governance and how they supposedly support terrorism and in general denouncing the Islamic political system as totalitarian and as the new Communism which will make the people subject to it, backwards with poverty and illiteracy. They say that the Islamic political system denies certain rights, blatantly ignoring the fact that these movements emerge as a counter to the tyrannical dictatorships which Western governments support. They aid those who oppress their subjects and deny any chance of progress due to corruption, nepotism and the plutocratic governments and elite which deny their people basic rights. All this support is given in order to aid these governments against the imagined threat of an "Islamic tyrannical regime" when in fact these militant groups want freedom and equality and they want to achieve this goal by implementing an Islamic political system. So in fact the very attributes which the Western governments claim to fight for, namely freedom and justice, are the very attributes which they suppress by aiding these tyrannical regimes. Thus the Western governments bring more hate towards themselves. This is repeated in many nations, especially in the Arab world.

A few words on the behaviour of the aggressors

One thing I have noticed is the hypocritical terminology employed not only by Western media, but by their leaders as well. The BBC was ordered by its heads to call Israeli assassination attempts (in which many innocent People died) "targeted killings" even though no trial was carried out to convict these men! Certainly when Israel or some other "ally"-nation commits these crimes it is easily forgettable, but when another nation which is not a close ally, commits this very same crime, it is used to demonise those particular countries. Why is it one standard for them and their close allies and another for nations which are not allies? Certainly, with the World Trade Centre attack on September the 11th 2001 we witnessed America accuse blindly the first suspect which came to mind, Osama Bin Ladin. They then proceeded to bomb the Taliban in Afghanistan who rightly refused to give Osmam Bin Ladin over because they were not presented with any evidence for his involvement in these attacks, but my question is, since they bombed a nation based on no "evidence", why do they not bomb Israel for not handing in the many criminals who are known to have committed war crimes, e.g. Sharon (of Shabra and Shatilla fame and Zionist massacres in the 40's, 50's and onwards)? If they use the logic they used on Afghanistan then they ought to use the same logic against Israel, which would render Israel getting bombed. That is just one hypocritical action of the Western governments, another which comes to mind is their action over Iraq, they claim that the only reasons why the sanctions are hurting the Iraqi people is because of Saddam Hussein. The West's incompetent handling of these so-called sanctions which is causing the most harm to the Iraqi people which results in it losing 6000+ people per month directly due to sanctions, and these facts are coldly dismissed by many leaders, who are essentially ignoring genocide which they themselves are committing, bringing further hate towards them. Let’s take their (Western leaders) statements as true for the sake of argument, if the suffering of the Iraqi people due to sanctions is completely the fault of the Iraqi regime, then because they acknowledge that innocent people are dying directly due to the sanctions, should they not stop the sanctions because then they are acknowledging that innocents died due to the sanctions (even if the blame is put completely on Saddam's regime)? Thus since they know innocents are dying unnecessarily, they are responsible because they are the ones who refuse to stop the sanctions.X

They are simply procrastinating with this conflict at the expense of 6000+ people dying per month directly due to sanctions, that can certainly be interpreted to be a war against Islamic people because they should have according to their logic done the same thing to Russia because Russia has used many weapons illegal according to the Geneva Convention on the innocent people of Chechnya and they have killed an estimated 60,000 people in this 2nd Chechen conflict alone, so by that logic they should get sanctioned and bombed, yet we do not see any criticism let alone action!

That can be interpreted to be a war against Muslim people because of their double-standards which cost so many innocent people's lives, they certainly seem to be harsh on Muslim people but when it comes to nations which are more of allies to them, no such word is heard.

Also, the Western leaders’ and medias’ definitions of "terrorists" and "terrorism" are very vague, one such example would be Chechnya. First of all, Chechnya was never a legitimate part of Russia, it was invaded 200 years ago and colonised by the Russians, various independence movements arose to fight the Russian rule in Chechnya beginning from 200 years ago, when the former Soviet Union collapsed, the leaders of the autonomous region of Chechnya declared Chechnya as independent after winning an election. After independence was proclaimed and talks by the Russian authorities failed to yield any results to stop this accession from Russia, the Russian army invaded and the first Russian-Chechen war of 1994-95 started in which thousands of civilians lost their lives. The Russians lost but they were receiving political backing from the Western world even though Chechnya was never a legitimate part of Russia! After this war the second Russian-Chechen war started in 1999 which still carries on today, even though Russia still has not produced the evidence incriminating any Chechen for the bombings in Russia which started this war, we still witnessed the hypocrisy of the whole world because they gave monetary/military (USA did) and political support to Russia and made public statements that Russia was "fighting a war on terror" even though no single shred of evidence incriminated Chechens! Furthermore, evidence actually emerged that it was Russia which started this war. The whole point is, Western governments and their allies support nations which commit terrorism but is not called terrorism by the Western leaders and its media because it fits their agenda.

While the resentment expressed by Muslims aren't only against Western governments, the majority of these people see Western interference as a hindrance against achieving justice, though Western countries have fought for justice sometimes, even those times they have shown a hypocrisy and hatred, for example their blatant stupidity in allowing Serbs to take over the Srebrenica refugee camps thus resulting in the murdering of thousands of innocent Bosnian Muslims, and not coming to Serbia until the Mujahedeen left, also their arms embargo against all groups in Yugoslavia knowing that the Muslims will suffer the most because they had no backing (defence) other than the Mujahedeen who were forced to leave. Another example is Kashmir, thousands of people have been killed by the Indian army and so many human rights abuses (war crimes) have taken place yet any group opposing the Indian government is labelled a "terrorist group". Even helping these Kashmiris with charity is a crime in many

countries, so with all this double-standards, is it no wonder how people come to the conclusion that this is a war against Islam? Why it that the only defence of Kashmiri people against Indian atrocities is labelled "terrorist-acts" when on the other side the Indian army can commit gross violations of human rights? Just what do they think they are doing when they declare these Kashmiri freedom groups as "terrorists"?