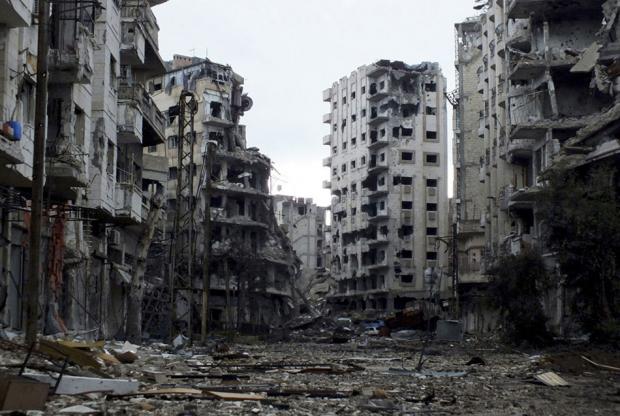 I support the government led by President Bashar al-Assad in the current situation in Syria.

What is happening in this country will cost dearly for the future of the entire Middle East.

If the terrorist plague, sown by Americans and their allies in Iraq, will spread to Syria, it will throw Syria, the most effective opponent of imperialism and its Nazi US-Zionist bull terrier, into a chaos of fratricidal Shia-Sunni conflict.

In this chaos, which will inevitably affect Lebanon and Jordan, the bloodiest radicals with the most brutal sectarian ideas will be supported by different Western and Jewish intelligence agencies.

Incidentally, this would undermine Turkey under Erdogan, which in recent years, developed good friendship with Damascus. But now it turns out that the NATO and the EU paid him more. So he betrayed the man he only a year ago called “brother”.

Inevitably all this will put Iran into a dilemma, whether to accept its isolation, or to start direct struggle for Iraq and Syria as a zone of its vital interests.

It will put an end to the Palestinian resistance, and to any other struggle against the neo-colonial crusade of the West in the Middle East.

Of course, President Assad understands the need for a major upgrade of Syria. But any modernization is impossible in a situation of civil war, terrorist activities and external pressure.

We would like to clarify the role of Saudi Arabia and its allies in what is happening today in Syria. If it turns out that the Saudis support terror gangs, the last doubts will vanish concerning their common interests with Zionism and imperialism.

We cannot just give up Syria and leave them at the mercy of the forces of chaos, imperialism and Zionism!

The other side of the Western “humanistic” pathos is war. War like the one that destroyed Libya, where they were talking about "defending the sky", but acted for extrajudicial killing of a legally elected political leader of a UN member state, systematic destruction of infrastructure and the seizure of oil and gas resources of the country.

The Western powers under the USA are preparing similar fate for Syria. On Syrian holy land NATO troops will eventually hurl their bombs and missiles.

US-Zionist entity is one of the main orchestrators of Syrian civil war, even though the Israeli media are trying to tell us that Israel is not interested in this war. Ostensibly Israel is interested to keep the

“Assad regime”. Supposedly "if the Assad regime will go away and these radicals come to power, that will be bad for Israel." This is of course nonsense.

It is clear why US-Zionists want to destroy Assad and Syria. Syria is the last Arab state which politically and militarily supports the Palestinian resistance movement. There are about a million Palestinians peacefully living in Syria. There are very strong political parties such as Hamas, the

And the second point is, of course, Hezbollah, which dealt a heavy defeat to the enemy in the 2006 war, destroying dozens of the most advanced US-Zionist tanks. The numbers are still kept in secret, but fact is, military losses were severe. It is clear that without support of Syria, it would have been impossible. US-Zionist’s most important tasks are destruction of Hezbollah and elimination of the

From this point of view, US-Zionists position is the same as the position of Saudi Arabia, Qatar and other munafiks, as Muslims, that is, hypocrites, who, portraying themselves as friends of the Palestinian people, have excellent trade relations with US-Zionist entity. And the military too, we are sure, though there is no evidence.

Let’s recall that Qatar is the first country that immediately after the "Camp David Agreement" started supplying gas to the Jews. Jordan also has an open border, exchanged embassies, etc. Egypt's position, too, has always been clear.

In words, they criticize the US-Zionists, paying lip service, like "Palestine should be free, blah blah blah", but in fact they have the same boss, American political elites and the US Dollar. Their aim is the same: to eliminate the Palestinian resistance movement as a fact in the Middle East. In this matter the position of Qatar, US-Zionists and Saudi Arabia are the same. Only the Americans would not want to eliminate the Palestinian movement; they would rather like to tame it to serve their purposes.

Preserving the integrity of reforms in Syria while preserving the Syrian State is the most important task of all those who stand in the position of supporting the just struggle of the Palestinian people. As well as bringing democracy to the Occupied Palestinian state, where Muslims, Druze, Christians, and even Jews and non-believers could live in peace. This is quite a realistic project.

The historical mission of the Syrians is wider than current Syrian borders. Let’s not forget about

Palestine as a holy burden on the shoulders of President Assad.

We hope that all parties in Syria will find the strength to remember this paramount task facing the Syrian government, and find a format of reform that does not plunge Syria into a situation of chaos, instability, total anarchy, from which there will be no way out.

May Allah, s.w.t. grant the Syrian People wisdom and the President strength